“Don’t Be Afraid to Show Up:” Meet the Fall 2019 Student Commencement Speaker 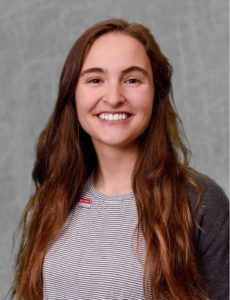 With a chance to send a lasting message to graduates who are about to take on the world by force, what may be viewed as a daunting task by some is seen by Fall 2019 Student Commencement Speaker Abigail ‘Abby’ Carbone as a dream come true, and an opportunity to empower fellow women in STEM.

An image of student speaker Abigail Carbone, who smiles in front of a grey backdrop as she displays her NC State Engineering pin on her shirt.

“That’s going to be me, someday,” Carbone recalls thinking to herself as she watched December 2018 Student Speaker Lindsay McMillan take the podium at PNC Arena and deliver a speech about perseverance and owning your individual path to success. For Carbone, who is graduating with a Bachelor of Science in Materials Science and Engineering and a minor in nanotechnology, her own path to success has been paved with a string of impressive achievements: she has co-authored three research publications (a fourth is currently in production), won five awards for research presented at about a dozen national conferences, and became the first undergraduate staff microscopist at the Analytical Instrumentation Facility on campus.

Off campus, Carbone was hired at Eastman Chemical Company as the first intern in the Electronic Films Research Division, and participated in an undergraduate research fellowship at California Institute of Technology last summer. Oh, and she sings; from her freshman through junior years, Carbone performed alto and competed in three ICCA competitions with Acappology, one of NC State’s co-ed a cappella ensembles.

Carbone wouldn’t have gotten to where she is if she had let the fear of new challenges stop her from overcoming them. The message that she longs to convey to her fellow graduates this December is simple, yet powerful: don’t be afraid to show up.

Dedicated to science education and communication, Carbone says she learned “the importance of just showing up” while serving her community at a science outreach event at a local elementary school. Carbone and the other volunteers–all males–serving at the event paused during their demonstration to ask if anyone had any questions. A young girl in attendance pointed at her and asked, “How come you are the only girl up there?”

Carbone hopes that even if women feel outnumbered in whatever field they pursue that they, too, can recognize the importance of being visible representations of what achievement and boldness can look like.

Carbone displayed her mantra of showing up when she applied to be the Fall 2019 student speaker, which she describes as being a “huge honor.” She wants to represent a diverse and tenacious graduating class that has, as she described, “knocked down barriers that tried to tell them the ‘correct way’ to do what they’re passionate about.”

But Carbone also had a sentimental reason for applying to speak at commencement.

“My Grandpa Larkin was a pastor, and he was known for being an extremely captivating speaker,” she says. “So for me, the chance to speak about things that have had an impact on me is kind of like keeping his legacy alive.”

“I can’t pick just one person.”
Carbone says she’s most looking forward to being on stage and being able to thank everyone who has helped her throughout her time at NC State, and to show them how far their support has carried her. When asked who her biggest inspiration at NC State is, Carbone can’t decide on one, so she narrows it down to five who have had immeasurable influence on her academic and personal journey:

“I am inspired by Dr. Paul Maggard, for teaching me how to think like a scientist; Dr. Jacob Jones, for showing me what commitment to ensuring success for others looks like; Dr. Jeremiah Feducia, for daring me to pursue dreams that I thought were too big; Dr. Alexander Kemper, for asking me the hard questions; and Dr. Barclay Satterfield, for encouraging me to persist through obstacles I’ve faced.”

The kind words Carbone has for her mentors are mutual; each applicant for the student speaker position is required to have two letters of recommendation submitted to the Commencement Committee on their behalf from faculty, staff, or other university officials who can speak to their character. Dr. Jeremiah Feducia, Director of Undergraduate Programs and teaching associate professor for the Department of Chemistry, wrote to the committee,

“Having been at [NC State] for over ten years, I can say that I have never met a more opportunistic student than Abby…If our graduating students can leave commencement with even a quarter of the energy, enthusiasm, passion and optimism for the future that Abby has, they will certainly start their professional journey on the right foot.”

Dr. Lex Kemper, assistant professor for the Department of Physics, also spoke to Carbone’s grit, determination, resilience and thoughtfulness, and how Abby, “inspires others to find those [qualities] within themselves.”

What the Future Holds

Though she has yet to address her classmates herself, Carbone’s advice to prospective future student speakers is to be genuine and reflect on the moments at NC State that have had the biggest impact on you. Post-graduation, Carbone has her sights set on returning to Caltech to pursue a Ph.D. in Materials Science in the fall of 2020. But for now, she is focused on positively impacting her fellow students as much as she can as the Fall 2019 Student Commencement Speaker.

Summer and Fall 2019 graduates and their families and friends can hear Abby Carbone’s address to her fellow graduates at NC State’s Commencement ceremony on Thursday, December 19 at PNC Arena, or via livestream (details to follow).