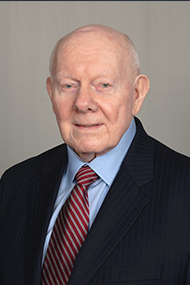 White began a career in the military (Air Force) during the Korean War. With the issuance of the GI Bill, he was able to pursue an undergraduate engineering education at NC State University. He was greatly inspired by the former MSE Department Head, Dr. William Austin who was invested in students’ success and subsequently made himself accessible to all students. As a way to honor Dr. Austin and cement his legacy at NC State, White established the Dr. William W. Austin Graduate Student Fellowship, a permanent endowment in the MSE Department that will enhance the department’s graduate student recruitment efforts. Also, White created an undergraduate scholarship to impact generations of students in perpetuity. These endowments provide critical resources for students studying materials science and engineering. After graduating with his bachelor’s degree, Gerald White went on to work for Douglas Aircraft Company as research and process engineer. In 1966, he joined Industrial Piping Supply Company as a fabrication engineer. In 1972, he transferred to a sister company, Industrial Piping Incorporated, where he started-up and managed a pressure vessel fabrication division. In 1984, he became a partner in Ward Tank and Heat Exchanger Corporation-a company that designs and fabricates custom shell and tube heat exchangers and pressure vessels. White retired in 2007 as vice president of Ward Tank but remains a partner in the company and sits on the board of director.