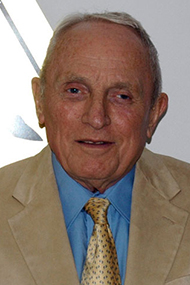 A native of Erie, Penn., Dr. Manning was head of the Materials Engineering Group in the National Aeronautics and Space Administration (NASA) Langley Advanced Materials Research Program from 1958 to 1967. He received his bachelor’s degree in mathematics and geology from Florida State University in 1958 and his master’s degree in metallurgical engineering from Virginia Polytechnic Institute in 1967. He completed his Ph.D. in ceramic engineering at NC State in 1967 and joined the College of Engineering faculty as an associate professor in the Department of Mineral Industries, which later became the Department of Materials Science and Engineering. Dr. Manning was promoted to professor in 1972. In 1981, he left the university to develop his private company, Accident Reconstruction Analysis, Inc., an engineering consulting firm that performs failure analysis and accident reconstruction. He has remained involved with the university through serving as an adjunct professor and a generous supporter, creating two endowments in the College of Engineering which supports students and the College’s funding priorities: the Arai Charles R. Manning Endowment and the Dr. Charles R. Manning, Jr. Enhancement Endowment.